Since his successes in international competitions, Klaus Hellwig has performed in almost all European countries. Since 1973 he plays regularly in the US, later in the Middle East, Brazil and Australia. Japan and other East Asian countries are visited by the musician since 1967. In 1977 Mi-Joo Lee came to Essen and Berlin with a DA DA scholarship,  further studies followed in Boston and Salzburg. She graduated with a concert exam at the Berlin University of Arts. After graduating in Salzburgwith honors, the International Mozarteum Foundation awarded her the Lilli Lehmann Medal for special artistic achievements. In courses with Guido Agosti and György Sebök she received further artistic suggestions.

The pianist began her career in 1985 with great successes in the international competitions Queen Elisabeth in Brussels / Belgium, Viotti in Vercelli / Italy (first prize) and in Tokyo, which she won within just one and a half years.

Mi-Joo Lee teaches since 1990 at the Berlin University of Arts. She gives masterclasses in Austria, France and Korea. Inje University in Korea named her Distinguished Professor in 2008.

In addition to her international concert career as a soloist, her heart beats for chamber music. Since 1986 she plays piano duos with Klaus Hellwig.

At the age of 16 Nicolas 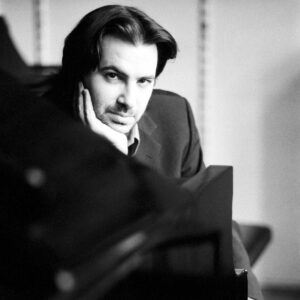 Bringuier graduated with highest honors from the Paris Conservatoire C.N.S.M. in the class of Bruno Rigutto and later continued his studies at the Universtät der Künste Berlin with Klaus Hellwig, where he passed a concert exam with the Berliner Symphoniker in 2009.

Nicolas Bringuier has won several prizes at international competitions. He won second prize at the Robert Schumann Competition Zwickau in 2004 – a success that was followed by numerous concert engagements and invitations to renowned European festivals.

In 2011, together with his long-time piano duo partner Olga Monakh, he created a chamber music festival “Les Rencontres musicales du Negresco” in Nice, which has become one of the most important events on the Côte d’Azur.  During the festival, the duo plays together with world-renowned musicians such as Gary Hoffman, Raphael Oleg, István Várdai, Nicolas Dautricourt, Esther Hoppe, Alexander Zemtsov and Denitsa Laffchieva.

The duo tours regularly in China and Europe and founded their own piano academy in 2015. Björn Lehmann performs both as a soloist and as a chamber musician, and he is particularly committed to the new music. He studied in Hamburg, Lausanne and at the Berlin University of the Arts under Klaus Hellwig. He also received important artistic suggestions, e.g. by Fausto Zadra, Ferenc Rados, Leonard Hokanson, Robert Levin, Zoltan Kocsis, members of the Amadeus Quartet, Hartmut Höll and Irwin Gage.

He plays with pianist Norie Takahashi in the piano duo Takahashi / Lehmann. So far, the duo has released two CDs on the label “audite”.

His commitment to new music led him to collaborate with composers such as Friedrich Goldmann, Mathias Spahlinger and Arnulf Herrmann.

Since 2011 he is Professor at the University of the Arts Berlin. He regularly gives master classes, among others in Germany, France, Switzerland, Japan, South Korea and China.

Benjamin Engeli (* 1978) performs in most of Europe, Australia, Brazil, China, India, Canada, Lebanon and the USA. He received his training from Adrian Oetiker, Homero Francesch, Lazar Berman, Andrzej Jasinski, Maurizio Pollini and Andràs Schiff. In addition to his solo career, he devoted himself to chamber music with enthusiasm: as a member of the Tecchler Trio, he won the ARD Music Competition in Munich in 2007, and is currently conducting a concert worldwide with the Gershwin Piano Quartet and other formations. From 2009 – 2017 he was a lecturer in chamber music at the Music Academy of Basel, and since 2013 he has been a piano professor at the Vorarlberg State Conservatory Feldkirch. Swiss pianist Kristina Steinegger studied at the Conservatory of Music in Bern, where she completed her pianistic education with a soloist diploma.
A multi-year scholarship from the British Council enabled her to study at Louis Kentner in London.
Her London debut was followed by many concerts at home and abroad.
Kristina Steinegger has devoted herself to teaching successfully for decades.
Many of her former students are now soloists, chamber musicians and educators.
In 2012 she founded the Clavarte Foundation.